Hirofumi Yoshida was born in Hokkaido, Japan, in 1968. He spent his childhood in Funabashi. He earned a Bachelor’s Degree at Tokyo College of Music, where he specialised in conducting, piano, double bass and musicology.
From 1994 to 1995 he moved to Vienna and obtained a Master Degree at Universität für Musik und darstellende Kunst Wien (Vienna National University of Music). In 1996, he took another Master course at the Chigiana Musical Academy in Siena, Italy. In August, he attended “Master Players” Conducting course in Lugano, Italy, and won the 19th edition of “Master Players” International Conducting Competition.
In 1999 Yoshida was selected as a trainee under the overseas study programme for upcoming artists of the Agency for Cultural Affairs and carried out his studies in Munich and Mannheim, Germany, and Malmö, Sweden.
In 2001 he passed the “Maazel/Vilar” Conductor’s Competition pre-selection process as Asian nominee. In 2002, Hirofumi Yoshida was awarded the Most Promising Young Talent Prize in the Opera Division of Gotoh Memorial Cultural Award. He was the first conductor in history to receive this award, which convinced him to pursue further studies in Rome.
In 2003 he was selected as special researcher to be granted financial support for overseas music activities from “Rohm Music Foundation”.

In 2005 Yoshida won 3rd prize at the 1st International Opera Conducting Competition in memoriam Bela Bartok, in Cluj-Napoca, Romania. After that, he made his debut with the Transylvania Symphony Orchestra in Romania and MAV Symphony Orchestra in Budapest, Hungary. He also conducted Cavalleria Rusticana and Rigoletto with the ensemble members of Teatro dell’Opera di Roma and made his debut in Italy.
In April 2006 he conducted Serata Nijinsky-Balanchin at Teatro Verdi in Trieste with the Rome Opera Ballet, which was under the direction of Carla Fracci.
In 2007 Hirofumi Yoshida performed Leoncavallo’s Opera Pagliacci at Terme di Caracalla, Italy, during the Summer Season of Teatro dell’Opera di Roma. It was the first time that a Japanese conductor performed in Teatro dell’Opera in its 130 years of history.
In 2008 Maestro Yoshida was the first Japanese conductor directing Aida at Cairo Opera House, Egypt. Given the high success of the performance, the Cairo Opera House invited Yoshida to conduct Madama Butterfly in 2009, a role he accepted with great honour. In the 2008 season Maestro Yoshida conducted La Traviata in Paris, Le Nozze di Figaro in Japan and Don Carlos in Hong Kong. In 2009, he conducted Elisir d’Amore with the orchestra of Naples’s Teatro di San Carlo. In the same year, he directed the orchestra of Teatro Massimo in Palermo, Sicily, and Turandot at Marrucino Theater in Chieti, Italy.

Maestro Yoshida was appointed as Music Director of the Mantua Opera (Teatro Sociale di Mantova) from January 2010. During the 2010 season he performed Verdi’s masterpiece Rigoletto in different theatres in Italy: Teatro Sociale of Mantua, Teatro Donizetti of Bergamo, Teatro Giglio of Lucca, Marialisa de Carolis Theater of Sassari. He made his debut at the Puccini Festival in Torre del Lago, Tuscany, where he conducted Turandot. He is the first Japanese conductor to have ever conducted Puccini’s work at the Puccini Festival. On this occasion, Simonetta Puccini, granddaughter of Maestro Giacomo Puccini, praised Yoshida for his music and conducting. In the same year, Yoshida made his debut at the Latvian National Opera with La traviata.
In 2011 he conducted Madama Butterfly at “Japan Festival” in Novara, Italy. The event was organised from the local authorities in collaboration with the embassy of Japan. On this occasion he conducted a Mozart’s Requiem in memory of the victims of the Great East Japan Earthquake. In July 2011 Yoshida conducted the orchestra of Teatro Carlo Felice of Genoa.
In 2012 Teatro Vittorio Emanuele II of Messina, Sicily, invites Maestro Yoshida to conduct Puccini’s Rondine. In the same year he conducted La sonnambula with the prestigious Cagliari Theatre Orchestra.
In July 2013 the Bologna Opera House invited Yoshida to perform at Teatro Comunale di Bologna (TCBo) in commemoration of the 250th year of the theatre. On this occasion he conducted Il maestro di musica and Il Don Chisciotte, two Baroque opera programmes composed by Padre Martini. In October 2013 Maestro Yoshida conducted TCBo orchestra at Kyoto Opera Festival, which is organised with the support of the Japanese government and whose Artistic Director is the same Hirofumi Yoshida. One of the recitals took place in Kiyomizu temple in Kyoto, which is UNESCO World Heritage site. It was the first time in Japan (Yokohama and Kyoto). It was the first time in the 1400 years of history of the temple that an opera performance was held in there. In the same year, Maestro Yoshida is awarded he was awarded the “Enrico Caruso” International Prize, which is conferred to Non-Italians who have made a great contribution to promoting Opera in Italy.
In 2014 Hirofumi Yoshida has been appointed Artistic Director of Philharmonic Orchestra of Bologna Opera House (Filarmonica del Teatro Comunale di Bologna, FTCB). On the occasion of his debut as FTCB Director, Yoshida conducted Brahms’s Violin Concerto in D major with the violinist Baiba Skride and Mozart’s symphony no. 41 Jupiter. At present Hirofumi Yoshida is also associate professor at Toho College of Music. 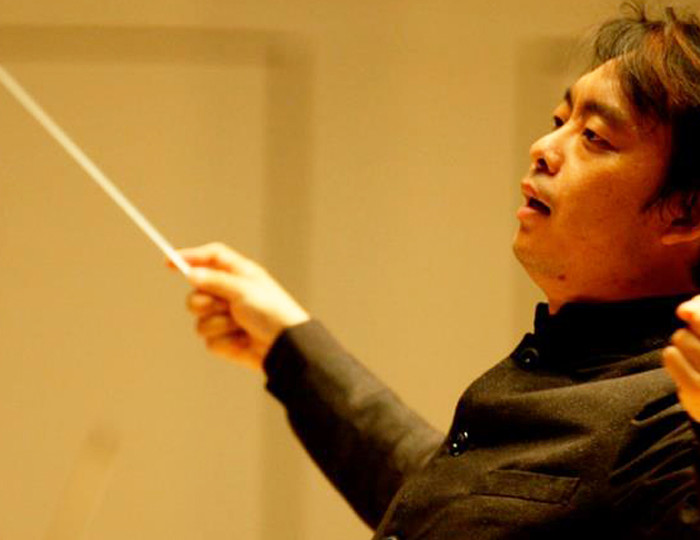